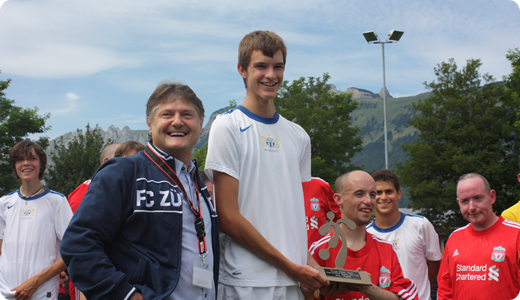 The highlight of today took place at twelve o’clock. The disabled-teams from FC Zürich played against Liverpool FC. A large crowd guaranteed an extraordinary atmosphere and the players played a great game.

When the famous football-anthem “You’ll never walk alone” sounded over the field as the players of the disabled-teams and the youth-teams walked hand in hand, the spectators felt the special atmosphere. Many U16-players from other teams were in the crowd and supported both teams loudly. Zurich won the game with the score 5-1. But the great experience all participants made, let the final score fade into the background. Ancillo Canepa, president of FC Zurich, demonstrated respect for both teams and highlighted the connecting power of football. Further, he assured that after half a year, FC Zurich would hand the cup out to Liverpool FC. The spectators will keep this game in mind as a strong message for the integrating power of football.