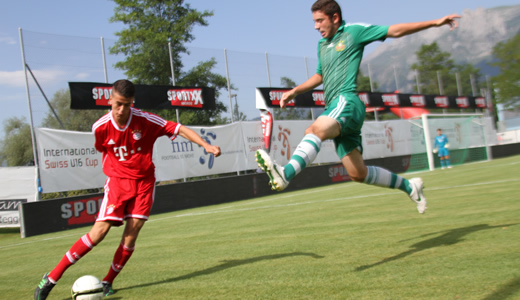 News
11. November 201214. November 2016 Lapala
The International Swiss U16 Cup was held for the 6th time in 2011 and it was a great success. The change of venue from Bad Ragaz to Ruggell (Liechtenstein) and folded problem in some areas, such as infrastructure, could do some additional progress. The smooth running and proper organization, which the audience already noticed during the tournament, has now been confirmed in a scientific study of the Sports University of Cologne.

In his thesis for the German Sport University Cologne, Jakob Strehlow examined in summer 2011, the quality and any possibilities for improvement of the International Swiss U16 Cup. Therefore he looked over the organizers shoulder in advance and was on site during the entire tournament. The core of his research does provide a survey of all the players and coaches of the participating teams.

The new venue in Ruggell was also very well received. For most clubs, Liechtenstein seems to be placed geographically well. But also, infrastructure and especially the football pitches were found to be particularly good. The lodging wasn’t criticized at all. Only the food was still classified as in need of improvement, especially by the players.

The Swiss U16 Cup serves as a perfect pre-season tournament. The timing of the tournament was a good choice and they could not only offer their players a change in training routine, but also in international comparison. In addition, the team building is a priority at such occasions.

For the players it was not only important to compete with their future competitors, they also gave great interest to get to know their colleagues from different countries and maybe even become new friends. They wished for future tournaments that contact with the other teams will be promoted even more. The recreational program should be expanded as well in their opinion. These wishes should be met in the future with additional activities. Interestingly, the coaches reviewed the activities and the contacts between the teams already as sufficient.

Particularly encouraging from the perspective of the Swiss U16 Cup organization is the fact that almost all respondents – both players and coaches – positively expressed the integration of the disabled players and the special guest team. Almost 90% of the coaches also stressed that the tournament has an important role in the transmission of social values to young people.

The Swiss U16 Cup 2011 was a special experience. It is nice that almost all survey respondents were “satisfied” or “very satisfied” with the overall atmosphere . “This great result is a wonderful acknowledgment of the work done, but also a huge motivation to provide the players and spectators once again with an unforgettable tournament in 2013”, according to Hanspeter Rothmund (OC overall leader).