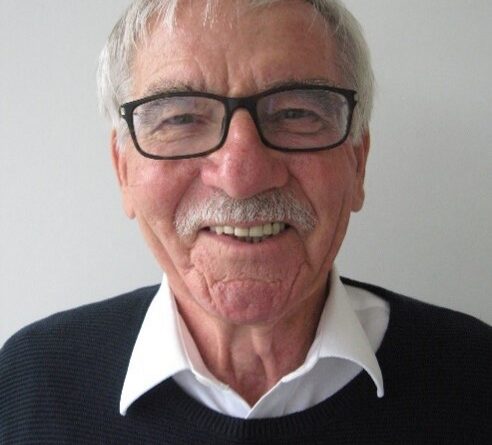 Benni Bruggmann’s passion has been football for over 40 years, first as a player, then as a coach and later as an instructor. He quickly noticed that many things were not going well in children’s football training. Together with colleagues, he was able to achieve a lot.
Today, his books have been translated into five different languages and are sold all over the world.
Find out here why supporting the 11th INTERNATIONAL HELVETIA CUP is a matter close to his heart:

Whatever he did, Jakob was always fully committed, passionate. In the bakery, where he served a large clientele reliably and kindly during the week as a food logistician – in the past they used to call him a runner – and on the football pitch, where he perfectly fulfilled his task as master of ceremonies in front of a large audience at the weekend, wearing a blue tracksuit and carrying a blue and white FC Gossau flag. That’s how I got to know him, the cheerful little man with Down’s syndrome.

Before the game, he “blessed” the two goals, invited the spectators to join in with his “Zigi-Zagi” and then led the referee trio and the two teams to the centre of the pitch for the kick-off. Then his performance was over, the shaking began. He was rooting for his club. After a victory, he was happy, could laugh and sing. After a defeat, he went home depressed. So that he didn’t have to mention the negative result, he wrote it down on a piece of paper. Anyone who asked him the result could read: lost 1:3.

I was coach at Gossau for a short time. There were many defeats. Once I tried to deal with my disappointment on the nearby artificial track. After a few rounds, I returned to the deserted football pitch. In the dressing room, next to my clothes, was Jakob. Silently. What a wonderful consolation!

Next year, in 2022, the INTERNATIONAL HELVETIA CUP will be held in St. Gallen. Football talents from all over the world will play there – and in the Special European Cup, people with disabilities from near and far. Jakob can no longer be there, not even as a spectator. He died a little more than ten years ago. But his colleagues will come and play football. They will be like Jakob: passionate, cheerful and sensitive.

That will make for a wonderful celebration in St. Gallen next August. A compliment to “FOOTBALL IS MORE” and to all those who make this tournament possible.