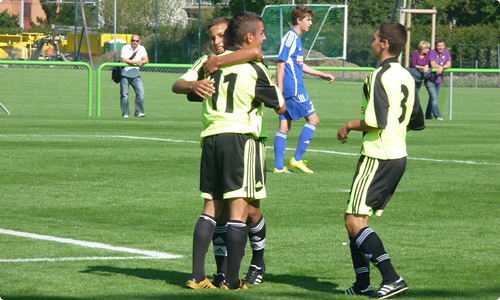 News
1. May 201214. November 2016 Lapala
The qualifying tournament for the International Swiss U16 Cup will be held at the training area, Heerenschürli, in Zurich on the 30th June 2012. The tournament consists of the following teams:

The winner automatically qualifies for the International Swiss U16 Cup 2013. The winning team then has the opportunity to compete with other high-caliber opponents from home and abroad.

The development of a young person’s personality is very important at the “International Swiss U16 Cup”. Therefore the Swiss U16 Cup and the foundation FOOTBALL IS MORE has teamed up to combine the Swiss U16 qualifying tournament with the Special Adventure Camp tournament. The idea will bring young people with and without disabilities in contact with each other and reduce the fear of contact. It also allows both teams to experience the different types of football.

In the previous editions these two tournaments were combined. These proved to be such a success that everyone involved agreed that they would continue and expand their cooperation.

The participants of the Special Adventure Camp tournament will include teams from Liverpool FC, FC Zurich, Manchester City and TSG Hoffenheim.