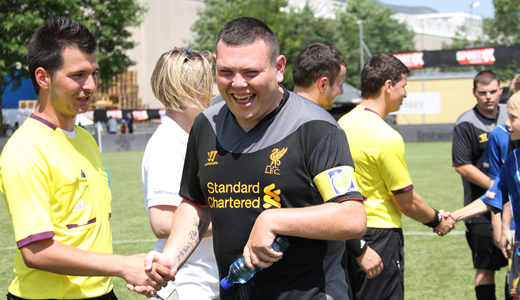 The qualifying tournament for the International Swiss U16 Cup will be held at the training area, Buchlern, in Zurich on the 28th June 2014. The tournament consists of the following teams:

The winner automatically qualifies for the International Swiss U16 Cup 2015. The winning team then has the opportunity to compete with other high-caliber opponents from home and abroad.

This summer from 25th to 29th June 2014 the Special Adventure Camp for people with disabilities takes place. The young players will get to know the region around East Switzerland / Liechtenstein during several training sessions and excursions. Football is more (FIM) is very excited to announce a Chinese team for the first time at the Special Adventure Camp. The youngster will have time to get to know each other and preparing for the final tournament during four days. The tournament takes place again in Zürich at the training centre of FC Zürich. As participating teams there will be of course the host team from FC Zürich as well as the titleholder from Abu Dhabi. More teams from Spain, Germany, Great Britain, Switzerland and Austria are expected and will be announced later. Again there will be held the under15 qualification tournament for the Swiss Cup 2015 on the same day in Zürich to highlight our inclusion work. Sport is supporting the understanding between people with and without disabilities and it helps to reduce the fear of contact. The experience we gained in the past years shows us that we release great emotions and pleasure with the two tournaments running in parallel.