St. Gallen is ready for the upcoming INTERNATIONAL HELVETIA CUP 2022, but also the players with and without disabilities are in the starting blocks.  The teams from Paris, Marseille, London and Lisbon arrived in St. Gallen today. FC Chelsea arrived already this morning. Paris Saint Germain joined them in the afternoon and has already completed its first training session at the Gündenmoos stadium. The players from Olympique de Marseille, Rangers FC Glasgow and Benfica Lisbon will arrive this evening.

Opening ceremony in St. Gallen’s Gründenmoos stadium under the sign of inclusion

On Thursday, twelve U17 teams and eleven teams with people with disabilities from all over Europe, together with the EE12/EE13 youth and women’s teams from the St. Gallen region, ceremoniously opened the 11th INTERNATIONAL HELVETIA CUP – Football for Inclusion 2022 at the Gründemoos stadium.

Numerous football players with and without disabilities from eight nations, women, men, children, young people and adults entered the Gründenmoos stadium together to open the 11th INTERNATIONAL HELVETIA CUP – Football for Inclusion 2022. They are all different, but they all share the same passion. They are all united by their love of football.

The opening speeches were given by Cantonal Councillor Jens Jäger, President of FC St. Gallen, Matthias Hüppi, Robert Breitner from the Swiss Football Association and Mr Hanspeter Rothmund, Managing Director of the organiser, the non-profit association FOOTBALL IS MORE.

Following the opening ceremony, the first matches were kicked off: the U17 tournament was opened by FC. St Gallen and FC Lugano. The tournament for people with disabilities, the Special European Cup, started with a match between Benfica Lisbon and FC Chelsea. The FF15 girls’ team played against Team Liechtenstein and in the youngest category, the youth teams of FC St. Gallen and FC Will competed for a first victory.

The first day ended with a dinner for all players at the Gründenmoos stadium. Moments of exchange are just as important as the games themselves because this inclusive event is about more than sport. The participating athletes with and without disabilities spent a week experiencing inclusion on and off the pitch so that they can carry these experiences from the football pitch into everyday life.

The ball is rolling for inclusion in the heart of St. Gallen

On Friday, it was the passion for football that brought football players with and without disabilities together at St. Gallen’s Klosterplatz.

At the Klosterplatz in St. Gallen, everything revolved around inclusion. Football players with and without disabilities played a friendly tournament in mixed, inclusive teams.

Among others, the amputee football team from Olympique de Marseille, which played with crutches alongside youth and girls’ teams from Wil and St. Gallen in a joint team, was there. The U-17 players from Paris Saint Germain led a warm-up session with the young people with disabilities and visibly had a lot of fun. The young players from VfB Stuttgart enthusiastically cheered on their team of players with disabilities. At Klosterplatz today, you could feel how much sport connects.

The whistle was blown by Dominique Blanc, President of the Swiss Football Association and patron of the INTERNATIONAL HELVETIA CUPS – Football for Inclusion 2022, the sporting event that hosted today’s inclusion tournament at Klosterplatz. With this commitment, the SFV President demonstrates the association’s social engagement: “This tournament is symbolic of our mission, said Dominique Blanc, football is integration in action. And football is inclusion. People from all over the world and everyone in his or her uniqueness come together. Playing and training together. Scoring goals together. Celebrating together or bearing the pain of defeat together. Football unites. Football unites.”

In the end, a party and concert for all players took place in Gallusstrasse, which was open to the public. It was an opportunity to make friends across supposed borders and to see the football stars of tomorrow in a friendly atmosphere.

Parallel to the inclusion tournament at Klosterplatz, the international U17 tournament continued at Gründenmoos. The action was exciting. After the first games, no clear favourite could be identified. All twelve teams played high-calibre duels at eye level.

Inclusive training as part of the Special European Cup

The day started with an inclusive training session led by former Chelsea FC foundation head coach, Andy Rose, together with all the Special Adventure Cup inclusion coaches. Players with disabilities and the U17 football coaches took part. I Camaleonti FC Lugano coach, Boris Angelucci, said after the training: “Today on the pitch I both taught and learned. In inclusive training, everyone benefits from who participates and who teaches. ”

Afterwards, the Special European Cup and the U17 tournament continued. After exciting matches, the teams from Olympique de Marseille, Paris Saint-Germain, SV Werder Bremen and local hero FC St. Gallen 1879 made it to the semi-finals.

Finals of the International Helvetia Cup. A single winner: inclusion

SV Werder Bremen and FC St. Gallen 1879 won the semi-finals of the U17 tournament on penalties. The FC St. Gallen 1879 goalkeeper made two brilliant saves. In the final, the home team lost 0:1. The happy winning team celebrated exuberantly with the team for people with disabilities.

The Special European Cup trophy was won by Benfica Lisbon, but the real winner of this year’s International Helvetia Cup is inclusion.

The finals of the Special European Cup took place today at Gründenmoos with a full stadium and thunderous applause from the U17 players of the respective teams. The four days spent together on and off the football pitch visibly brought the young people with and without disabilities from the twelve participating clubs closer together. 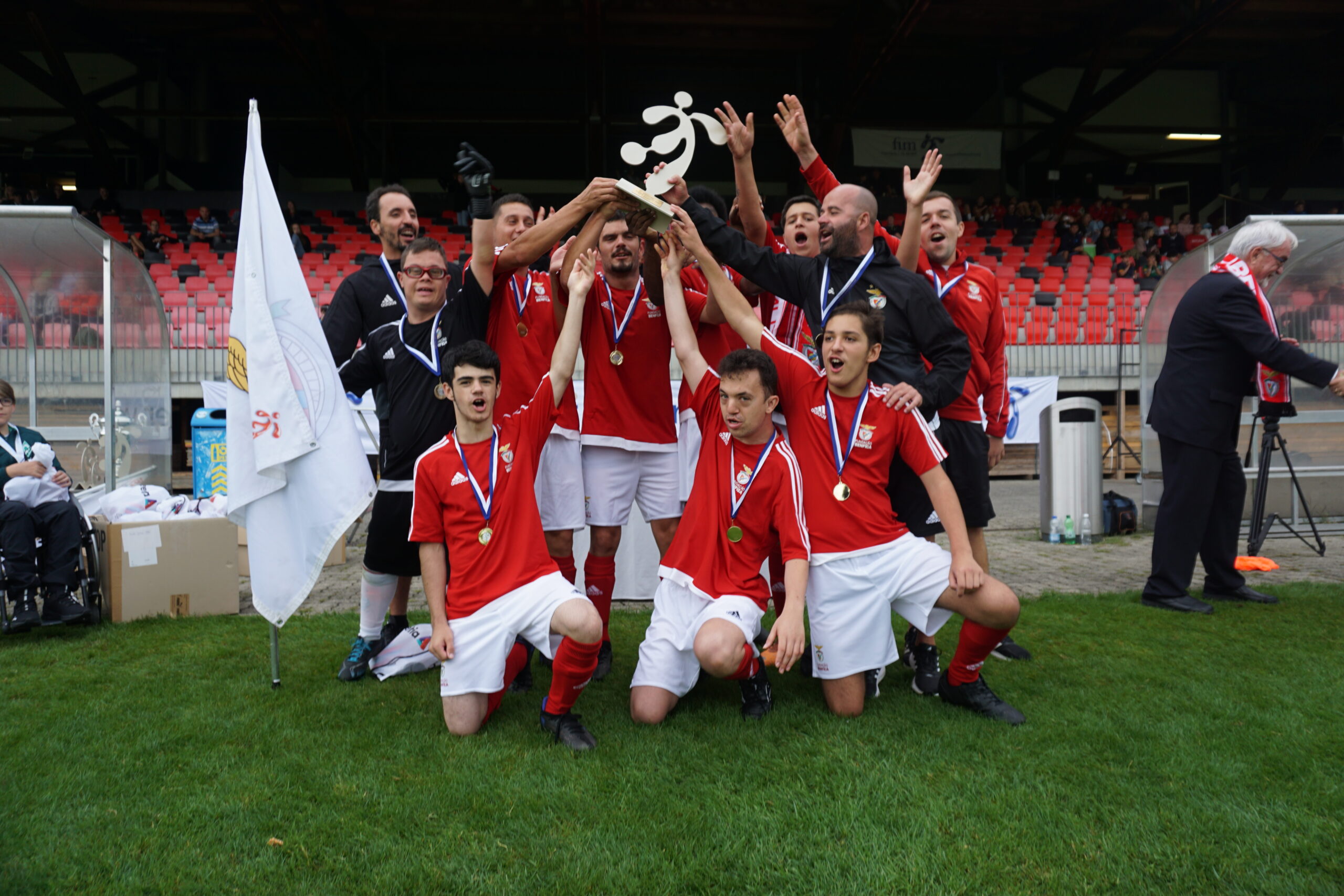 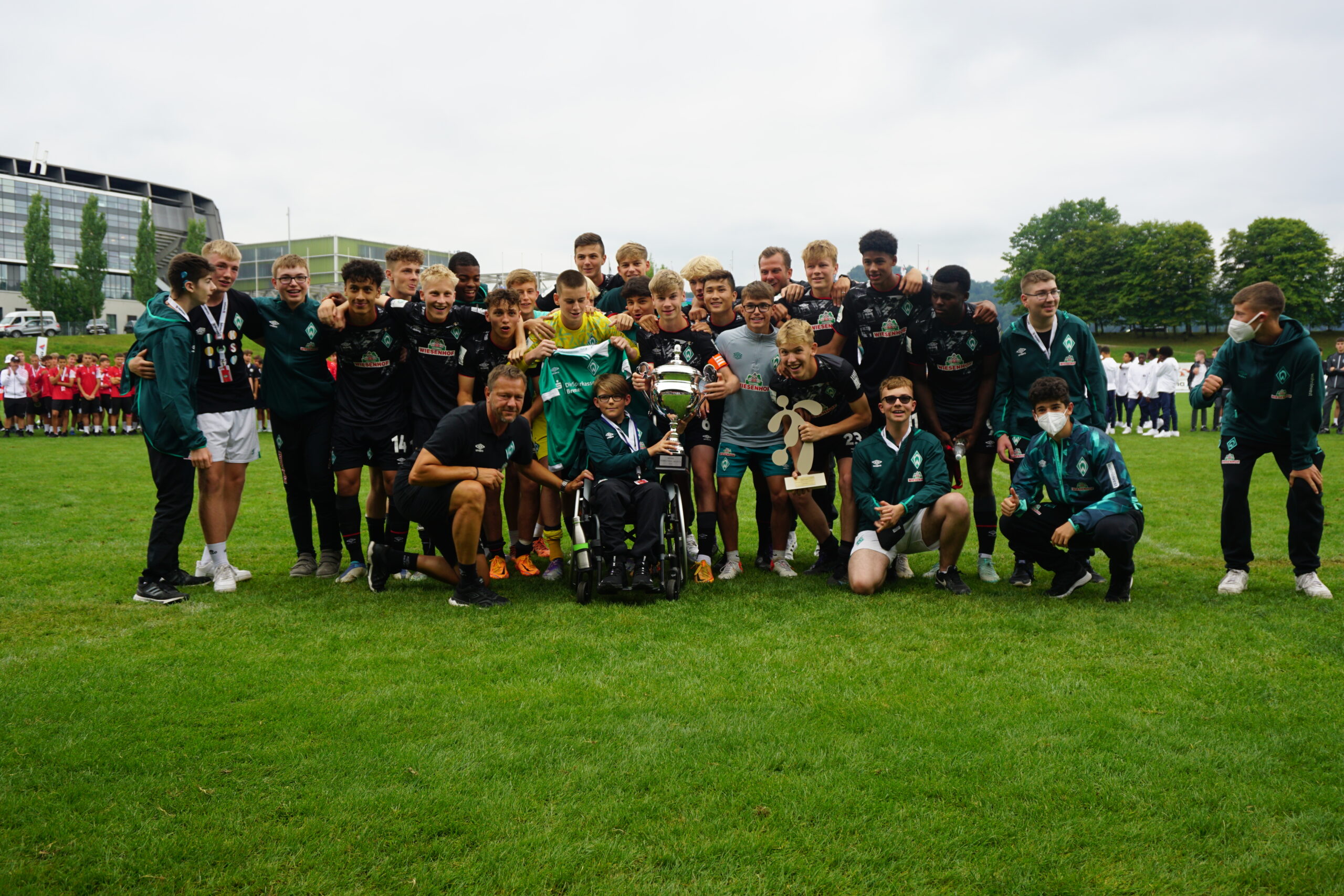