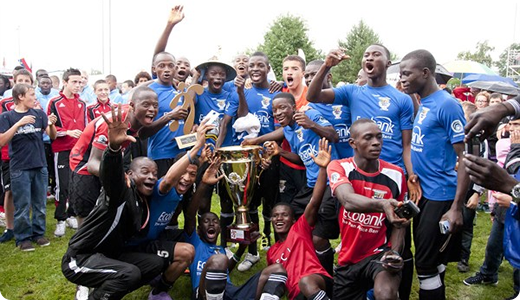 For the first time in tournament history, the Special Guest Team wins the cup. The feeling of happiness and relief was observable in their face when they rised up the trophy from the International Swiss U16 Cup to the sky.

The africans played very constant and on a high level during the whole tournament. They won the final in the overtime against Liverpool F.C. with 1:0. The second club from England did it better and won the small final against VfL Wolfsburg with 2:1. The positions two and three are pointing the excellent performance of the English teams up. Surprisingly, neither a german nor a swiss team is ranked in the top three even they are normally among the world’s best.

Apart from the rainy weather on Sunday, the tournament was a complete success. The organising comittee would like to thank all teams, viewers, volunteers and sponsors. We are looking forward to the next International Swiss U16 Cup in summer 2013!