Integration of the Swiss Referee Academy

A training tool used for the Referee Academy in Switzerland.

The best talents from the regions are promoted at national level on three levels. At the “Basics” level, the referees receive assignments at the INTERNATIONAL HELVETIA U17 CUP, which is played at a high level.

We from the organisation would like to make our contribution to this young and new programme of the referee association. At the same time, we are happy to referee the games at a high level.

At this year’s INTERNATIONAL HELVETIA U17 CUP, the referees of the Referee Academy were in action.

Paris St. Germain, Glasgow Rangers, Benfica Lisbon, Olympique Marseille – illustrious names that stand for passionate football not only among the active players. In junior football, too, these teams are among the international elite. The teams from France, Scotland and France competed with teams from Switzerland, Germany, Austria and the special guest team from Ukraine. The football of the up-and-coming football talents can be described as tempo football paired with a high density of duels. And where there are up-and-coming football talents, there are up-and-coming referee talents not far away. The Referee Academy of the Swiss Football Association was responsible for the match management.

In addition to the match management, the focus was also on the exchange with the referee trio from the Berlin Football Association. Both the Swiss and the Berlin players were able to benefit from the know-how of their (inter)national comrades. The fact that differences in “referee philosophy” were revealed time and again – not only in the area of flag signals – was also valuable for scrutinising one’s own match management and making fine adjustments where necessary. A coaching discussion after each match and the opportunity to analyse individual scenes on video helped the referees and assistants of the Academy to improve their own match management. 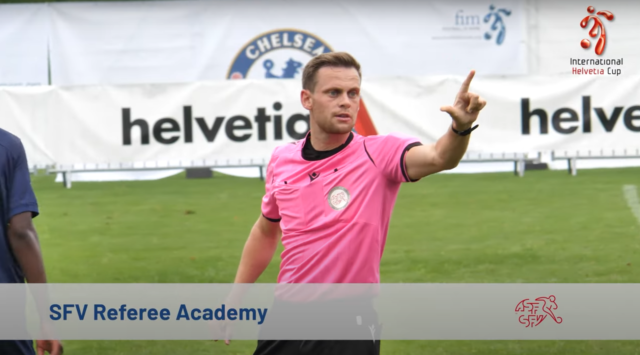